This article describes how in a normal operation, FortiGate as a main gateway has to deliver dynamic IP addressing to all users who want to have access for Networking services, but this scenario might change depending on network requirements and capabilities.

Wireless solutions for IoT and BYOD

FortiGate works as a wireless controller managing several FortiAPs, functioning as a DHCP server for end users. However, when a centralised DHCP service is located remotely configuration changes need to be made on FortiSwitches (or 3rd party switches) where DHCP assignment is needed to be propagated by FortiAPs,

All FortiGate units function as a Wireless Controller.

Solution
1. Using an internal software switch the port internal1 is connected to FortiSwitch

2.   Go to the port and configure as “Dedicated to FortiSwitch”, configure any desired IP address to manage them. 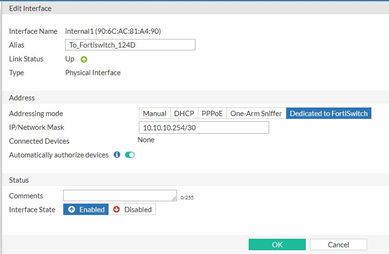 3.  Once a Dedicated FortiLink is configured, FortiGate will be able to discover a FortiSwitch (if it is connected to a default FortiLink to FortiSwitch side).

4.   Create VLANs interfaces on FortiGate to bind them to FortiSwitch and distribute each DHCP server traffic. It will be VLAN 10 and 20.

After VLANs are created, the view of VLAN interfaces over internal1 port is as follow: 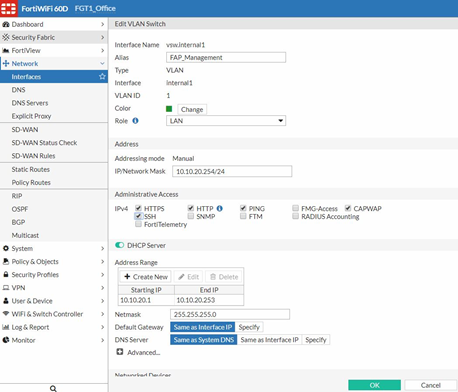 Note : Check Administrative access HTTP(S), PING, SSH to make some troubleshooting over FortiAPs. It is important to check CAPWAP protocol to register and send FortiAP configurations.

6. Then, FortiGate will be able to reach FortiAPs over vsw.internal1 interface. Make sure to give authorization to start working on them. 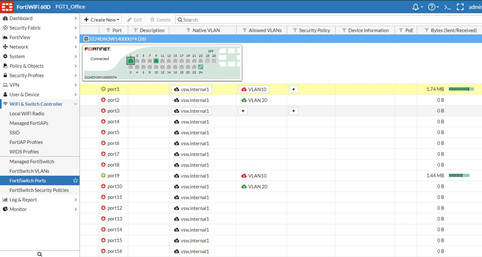 8.  Configure an SSID for each Service VLAN. Go to “WiFi & Switch Controller” > “SSID” and click on “Create New (SSID)”, This will be a bridge traffic as it comes from the other device. 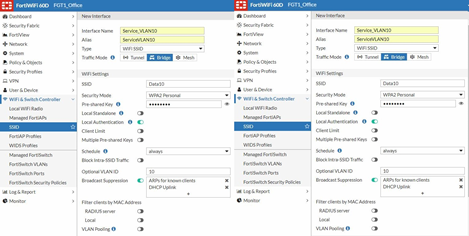 Note: The same configuration has to be applied on Radio2 selecting the specified SSID for VLAN 10 or 20

After being provisioned each FortiAP, they will be rebooted to get new configuration over CAPWAP tunnel.

The following shows the final configuration:

11. Now configure the DHCP servers to the connected ports.

Note : By default FortiSwitch and some 3rd party vendors have DHCP snooping enabled. This configuration blocks DHCP request from untrusted ports, in this way switch is allowing DHCP notifications from original sources. 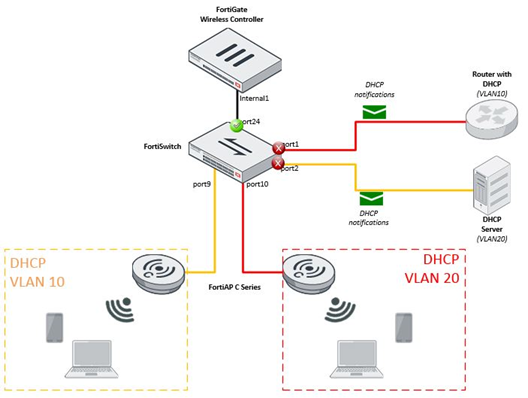 To Permit these DHCP packets to reach end devices on both VLANs, disable DHCP Snooping on port1 and port2 in FortiSwitch. Run the following commands: 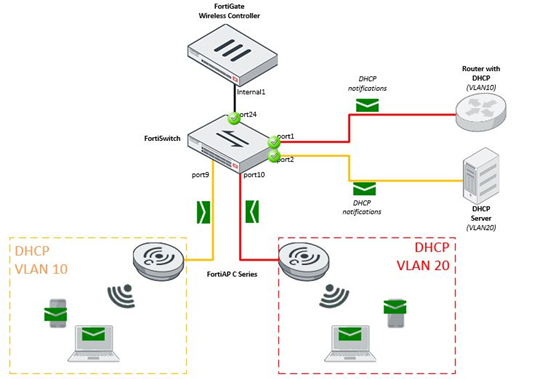