Description
Equal cost multi-path (ECMP) is a mechanism that allows a FortiGate to load-balance routed traffic over multiple gateways.
Just like routes in a routing table, ECMP is considered after policy routing, so any matching policy routes will take precedence over ECMP.

When ECMP paths are exceeded, this can cause problems with all routing when a new route is added into the ECMP path.

Solution
ECMP pre-requisites are as follows:
- Routes must have the same destination and costs. In the case of static routes, costs include distance and priority.
- Routes are sourced from the same routing protocol. Supported protocols include static routing, OSPF, and BGP.

The default setting for the number of max ECMP paths allowed by a FortiGate is 255.

Note that setting ecmp-max-paths to the lowest value of 1 is equivalent to disabling ECMP.

To configure the ECMP algorithm from the CLI:

Note that ECMP mode can be adjusted for each VDOM.

The following table summarizes the different load-balancing algorithms supported by each: 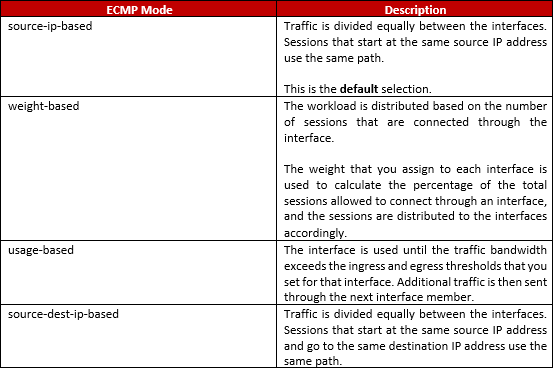